Sorry folks, Auckland is headline news again, with property prices continuing to climb in the overheated property market. Seasonality does have a part to play with an increase in listings across the country as the weather gets warmer.

The latest monthly QV Residential Price Movement Index shows that nationwide residential property values for November have increased 5.1% over the past year and 0.7% over the past three months.  This means they are now 16.7% above the previous market peak of late 2007. When adjusted for inflation the nationwide annual increase drops slightly to 4.0% and values remain 0.4% below the 2007 peak. 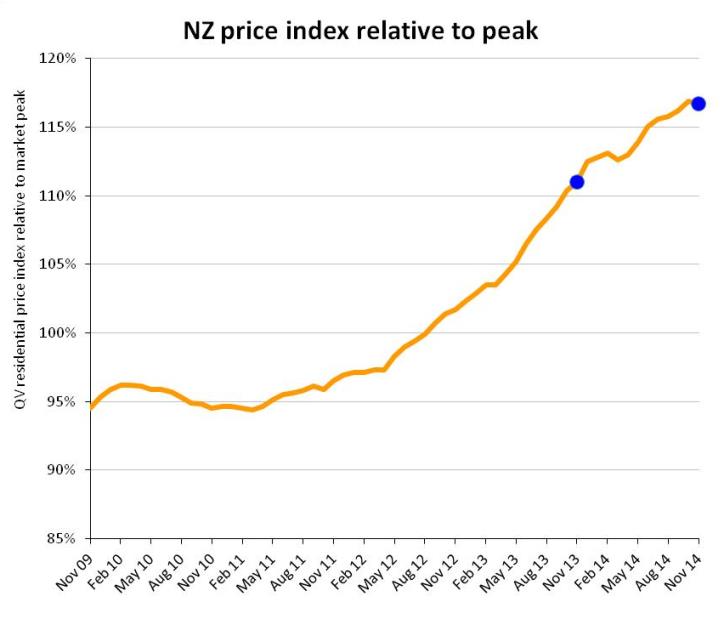 QV National Spokesperson Andrea Rush said, “We are seeing a reacceleration of values in Auckland with the residential price movement index now showing a steepening upward trend and values in some areas have risen 5.0% over the past three months.”

“Residential property values in the other mains centres including Hamilton, Tauranga, Wellington, Christchurch and Dunedin are also showing moderate increases.”

“Nationwide there’s been an influx of new listings to the market plus which is usual for this time of year and this has resulted in an increased number of sales and home loan approvals.”

“Recent research shows that since the LVR speed limits were introduced investors are taking an increased share of house sales from first home buyers and those moving from one home to another.”

“With less first home buyers and movers to compete with in the market, conditions are proving to be more favourable for investors than they were prior to October last year when the LVR restrictions were introduced.”

“However, this could change if the Reserve’s Bank decides to bring in new rules around lending to investors who own five or more properties which it has indicated it will be reconsidering early next year.”

Home values in Auckland are continuing to accelerate and most parts of the super city saw increases over the past three months with the exception of Rodney.

Rodney District values bucked the trend decreasing by 1.5% over the past three months but values there are still up 7.1% year on year; Rodney- Hibiscus Coast values were also down 2.0% over the past three months but have increased 7.1% since November last year; and Rodney North values are also down 1.2% since August but up 7.4% since this time last year.

On the North Shore, North Shore Onewa saw the greatest value increases, up 5.0% over the past three months, 8.7% year on year and values there are now 43.6% higher than in 2007.

“We are seeing examples of well presented, but not high end properties selling for much more than their original purchase price within a short space of time. While these have often been upgraded in the intervening period, the rise in sale price far exceeds the money spent.”

“Conditions are also favorable for investors, and in South Auckland there have been examples of investors buying multiple properties, adding fuel to the investor rule debate for investors with five or more properties that the Reserve Bank is currently looking at.”

Residential property values in Hamilton City increased by 1.2% over the past three months, 3.0% year on year and they are now 1.7% higher than the previous peak of 2007.

QV Hamilton Registered Valuer, Nicky Harris said, “There’s a sense of urgency in the market and we are seeing more activity towards the bottom of the market and first home buyers are more active.”

“Well established areas are also seeing increased activity with homes selling quickly and plenty of sold signs around town. There still seems to be plenty of interest in vacant land as well and we have also been some significant land sales for Hamilton recently.”

“In terms of surrounding areas, most parts of the Waikato remain quite flat as does the South Waikato, Otorohanga and Waitomo Districts. However, values in areas further North towards Auckland, such as Pokeno and Tuakau, have seen some big increases which is likely to be due to the “Auckland effect” as people head further out of the Super City to find affordable homes.”

Values in the Western Bay of Plenty increased 2.5% over the past three months and 6.2% since November last year, but they remain 6.3% lower than 2007 levels.

QV Registered Valuer Mairi Macdonald said, “There appears to be increased buyer interest in the Tauranga property market and an increase in listings however sales volumes are steady so this doesn’t seem to have translated into a higher number of properties selling yet.”

“Western Bay of Plenty rate payers will receive their new rating valuations this week and we are seeing limited demand from buyers for properties towns like Katikati and Te Puke.”

Home values in the Wellington region over all are stable with a slight increase of 0.1% over the past three months and 0.5% year on year however values remain 1.2% below the previous peak of 2007.

Wellington–East home values have increased the most in the region up 2.0% over the past three months, 2.8% year on year and 1.7% since the previous peak of 2007.

QV Registered Valuer Pieter Geill said, “Wellington is seeing a surge activity with lots of new listings on the market and we are also seeing sold signs going up around the city.”

”Well presented, located and priced homes are still selling well and investors are active again across the city, however those moving from one home to another seem to be staying put which means there is not as much activity or sales in the middle part of the market.”

“In the Hutt Valley there has been more activity over the past couple of months than over the winter and there is a positive feeling in the market.”

“Hutt homes up to the $400,000 mark are in demand and selling quite quickly, while homes at the higher end particularly over $900,000 are taking much longer to sell.”

Home values in Christchurch City have increased 1.0% over the past three months and 3.7% year on year and are now 23.0% higher than in the previous peak of 2007.

QV Christchurch Registered Valuer Daryl Taggart said, “Listings and sales are up and there’s reportedly strong competition for good quality and properties in desirable localities, but some other properties are failing to attract interest and are proving more difficult to sell.”

“There has been good activity in the new build and vacant land market and as a result section values appear to increasing across the board compared to this time a few months ago.”

“The effects of the earthquakes are reducing for some with a good number of homes having now been repaired across the city.”

“For the damaged properties the “as is where is” market continues to be gaining strength with constant sales, both as development and investment prospects. There are many investors who are now very active in this segment of the market who are prepared to take the risks associated for the increased reward in high yields.”

Dunedin-Taieri values were up the most up 1.6% over the past three months and 1.6% year on year and they are now 3.5% higher than the previous peak of 2007. Dunedin-Central and North values also increased by 1.4% over the past three months, but they are down slightly by 0.1% year on year and are 0.3% below 2007 levels. Dunedin-South values have decreased by 0.5% since August. However, they have increased 1.5% year on year but remain 2.5% below 2007 levels.

QV Dunedin Registered Valuer Duncan Jack said, “There has been some value growth within the Dunedin market and conditions remain slow and steady.”

"The traditional increase in activity during spring has occurred but to a much lesser degree than is usual and listings levels are lower than normal for this time of year."

“There is reasonable demand however and homes that are listed tend to sell reasonably quickly making it a good time to sell as there is not much competition.”

Residential property values in the provincial centres are a mixed bag again this month with some areas seeing value increases, some flat and others seeing value decreases.